Livorno aims to be one of the top port cities in Southern Europe, thanks to “Darsena Europa” megaproject.

€800 million project will change the Port of Livorno over the next four years.

Wednesday 23 March 2022 is one of those glory days that will remain in the history of the Port of Livorno, a date that marked an additional step towards the future.

In the presence of the Governor of the Region of Tuscany, the integrated contract for the construction of maritime defence works and dredging for the new dock was signed.

This signature marked the start of the first stage of the concrete construction of Darsena Europa, the ambitious project to expand the terminal into the sea.

After months of work, the agreement was signed by the extraordinary commissioner for the project, Luciano Guerrieri, and special representative Carlo Alberto Marconi, representing Sidra, the parent company of the temporary consortium formed by Fincantieri Infrastructure Opere Marittime, Società Italiana Dragaggi, Sales and Fincositla.

Investments of €800 million are planned for the construction of the new infrastructure. Of these, 200 million have been allocated by the Government, 250 million by the Region of Tuscany, 60 million by the Port Authority and another 50 million by the Sustainable Development Fund. A remaining €300 million will be guaranteed by private investors to build the terminals.

The work will last about four and a half years and will initially include the executive design, the setting up of the construction site, the war reclamation, and the preliminary investigations.

Two new breakwaters will then be built: a 4.6-kilometre-long breakwater to protect the outside of the port, and a 2.3-kilometre-long inner breakwater to delimit the new 90-hectare reclaimed water reservoirs, which will be added to the existing 70-hectare area. The flooding basins serve to contain the sand dredged from the seabed.

The seabed will rise from 12 metres to a maximum of 20 metres thanks to the dredging, which will have a volume of 15.7 million cubic metres and will involve both the areas affected by the new defence works and the deepening of the seabed of the access channel and the inner docks. The aim of the dredging is to bring the seabed to a depth suitable for the increasingly large container ships.

The mud and debris excavated from the seabed will be used to build the new forecourts of the Darsena Europa and partly to nourish the coastline.

The new platform will cover an area of 60 hectares, the size of 85 football fields, with a 1,400-metre quay.

Access to the port will no longer be only through southern entrance. A new one will be created to the north, a new channel, to solve the long-standing problem of the route being forced to bend 90 degrees, with considerable difficulties for ships in manoeuvre.

To understand the importance of this strategic project, we need to take a step back.

Over the last 15 years, the phenomenon of maritime gigantism has led to an exponential growth in the capacity and size of container ships visiting our ports. Ships have grown from 8,000 TEU up to 24,000 TEU, an increase of 118% in just 14 years. (TEU = Twenty Equivalent Unit, meaning the 20x12x8 foot container and also the transport capacity of a ship).

The causes of this phenomenon are a mix of driver factors: the increase in the volume of goods transported by container, the economic support of maritime finance provided to shipping companies and the logic of economies of scale (the more containers a ship carries over long distances, the cheaper the journey of a single container).

Larger ships mean the need for longer piers, longer-armed cranes and deeper port depths. Having more space available has also become an indispensable necessity for the Port of Livorno, since the structure of the port of call, due to the way platforms and access channels have been built and adapted over time, makes it difficult for ever larger ships to pass through.

In a few years’ time, this area will be available in the Port of Livorno, because a piece of the sea overlooked by the port of call will leave room for a huge new concrete platform, the Darsena Europa.

At present, access to container ships of up to 9,000 TEU is authorised in the Port of Livorno. Since the end of March last year, experiments have begun on the entry of ships with a draught of more than 11.5 metres. The new dock will be able to accommodate ships with a maximum load of up to 18,000 TEU. 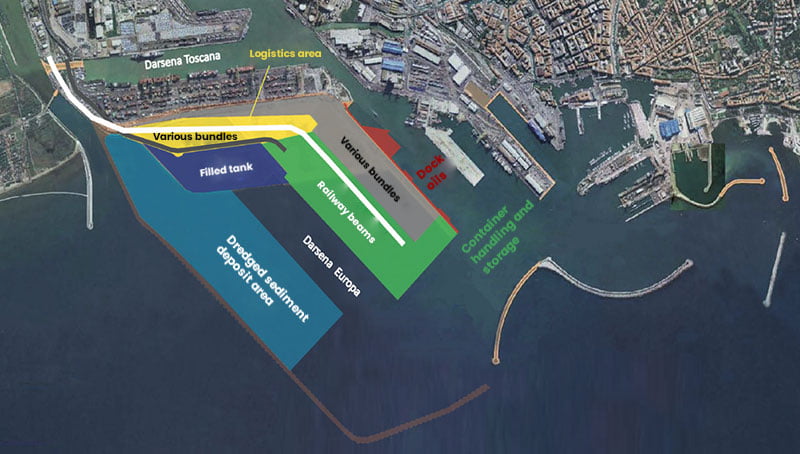 In 2021, the Port of Livorno handled 791,356 TEUs. With “Darsena Europa”, the goal is to at least double these movements, reaching 1.6 million TEUs unloaded in a single year.

Giorgio Gragnani s.r.l. firmly believes that this strategic project will have a positive impact not only on the Port of Livorno and the Tuscan Freight Village (namely Interporto Toscano – Amerigo Vespucci), but also on the entire region surrounding the port. In a few years’ time, Livorno is set to become one of the most important port cities in Southern Europe.

In order to be prepared for 2026, the year in which the work will be completed, a great deal of economic and organisational effort will be needed: those operating in the Port of Livorno will have to review their way of working. Companies will be called upon to invest in structures and workers to catch new traffic.

“Darsena Europa” represents an enormous development opportunity for the city, the region and the whole country.

Now that construction has started, the real challenge to face is to be prepared for when the new dock will be ready.

previous
Escalating in Ukraine threats gas supply to Europe
next
After decades of relocation, companies are rethinking their supply chains and coming back home.